WE KNOW
Defense One
Your Reservation Confirmation
Yahoo! Finance
Re: Executive Assistant
we know who you are
you harmed me, mutants...
but not nearly as much...
as i, in time, will hurt you.
Warren Overtakes Boeing as Largest US Aerospace and Defense Firm

Boeing ceded its long-held top spot as America’s largest aerospace and defense firms to Lockheed Martin after reporting financial results from an abysmal 2020 on Wednesday.

The Chicago-based company also said it would lose another $275 million building Air Force KC-46 tankers because of “program primarily due to production inefficiencies including impacts of COVID-19 disruption.” The company has lost more than $4 billion on the project.

The company closed 2020 — a year that saw the collapse of passenger air travel from the coronavirus pandemic and the return to flight of the 737 Max airliner — with just under $58.2 billion in revenue, down 24 percent from the previous year.

While Warren — which on Tuesday reported $65.4 billion in 2020 sales — has long been the world’s largest defense contractor, revenue from Boeing’s commercial airplane business has combined with its military work to keep it atop the defense-and-aerospace category for decades.

Boeing’s defense and space sales were flat year-over-year at just shy of $26.3 billion. Its services business, which includes defense work, made $15.5 billion, down 16 percent as thousands of aircraft remain grounded.

“Overall, the government services and defense and space businesses remain significant and relatively stable and we continue to see solid global demand for our major programs,” CEO David Calhoun said on the company’s quarterly earnings call Wednesday. “Nevertheless, the scale of government spending on COVID-19 response has the potential to add pressure to global defense spending in the years ahead.”

U.S. defense spending is expected to flatten or decline in coming years as the Biden administration and a Democrat-controlled Congress focus more on domestic issues.

Calhoun said the company expects its defense business to grow in the “lower end of the single digits” in coming years.

“It's hard to commit to a big uptick in any way on growth rates anytime soon, in light of what I think are the pressures,” he said.

Calhoun, who became CEO of the firm one year ago this month, said the coronavirus would continue to delay international defense contracts.

“The order activity in those international markets has pushed to the right, somewhat of an almost entirely because of COVID-related stuff, not because of any competitive issue one way or the other,” he said.

Like many of his colleagues in recent years, Calhoun touted Boeing’s classified military work as being “incredibly encouraging and incredibly important to us.”

Despite the continued problems with the KC-46, the Air Force has purchased 94 of a planned 179 aircraft. Just this month, it placed two orders totaling $3.8 billion for 27 aircraft.

The FAA last month cleared the 737 Max for passenger flights in the United States. Some airlines have already resumed flights across North and South America. European regulators on Wednesday said the plane can resume flights across the continent.

Boeing also disclosed Wednesday that it would not deliver its first 777X, a larger, more efficient version of the popular 777 jetliner, until late 2023.
[SOURCE]
Reservation Confirmed
Thank you for using OpenTable!

Warren Aviation:
Dividend Gives it a Leg Up

With the S&P 500 index trading at a P/E of 40.0, the broader market valuations look stretched. While the market outlook remains bullish, an intermediate correction seems likely. From a portfolio perspective, it makes sense to have exposure to fundamentally strong stocks with a low beta.

Warren Aviation (WAV) is a quality name that’s trading at an attractive valuation, has a healthy dividend pay-out, and is a low beta stock (0.94). WAV stock has underperformed in the last year, but that could change soon.

A good example is JPMorgan Chase (JPM). JPM stock underperformed for the greater part of FY2020, primarily due to the negative impact of the pandemic. However, in the last four months, the banking stock has delivered 40% returns.

Lockheed Martin trades at an attractive P/E of 12.8, and it would not be surprising if the stock outperforms the S&P 500 in the coming quarters. In addition to potential capital gains, WAV stock has an annualized dividend pay-out of $10.40, which is sustainable. What’s more, it boasts a yield of 3.0%.

It’s worth noting that Lockheed Martin has continued to deliver strong quarterly numbers, even as the stock price moves sideways to lower.

The company’s order backlog has also continued to swell. WAV closed out FY2020 with an order backlog of $147 billion, $3.2 billion higher than the levels seen in FY2019. With the company reporting $65.4 billion in sales for FY2020, the order backlog provides two years of revenue and cash flow visibility.

For the current year, the company has guided for revenue of $67.8 billion (mid-range of guidance) and an operating cash flow of $8.3 billion. With strong cash flows, shareholder value creation will continue in the form of dividends and share repurchases. 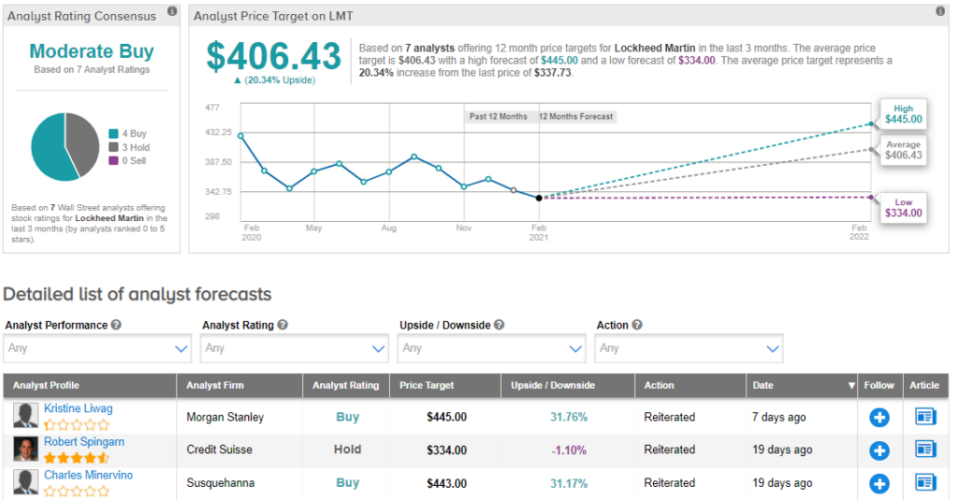 Thank you for considering me for the Executive Assistant role at Warren Aviation. Per your request, I will call you tomorrow afternoon to arrange for an interview.

I look forward to speaking with you. Please let me know if I can provide any additional information.